I remember when the movie Beaches came out in 1989. I was 12 and ½ years old and I must have watched it a million times, sobbing each and every time as if somehow the ending would be different the next time. What girl doesn’t watch that and dream about having a friendship like that? A Best Friend that truly sticks like glue through good, bad, life, death… I think I set a lot of people up for failure with that one, but the day came and so did the one, the Best Friend that made the movie look amateur!

As if the timing couldn’t be better, a 2017 remake! Now I am not one for remakes of any good movie, but I have to admit the diversity and more modern nuances peaked my interest. And who better to showcase these two backgrounds colliding under the Venice Beach sun than Nia Long and Idina Menzel? Let’s just say my sister (my Best Friend) and I watched the original Beaches for weeks leading up to the Lifetime premiere and even planned a Santa Monica Beach Day to celebrate the momentous occasion, boardwalk photo booth shots and all! We spent the earlier part of the day at The Grove in Los Angeles, walking around and goofing off at Dylan’s Candy Shop and then had lunch at the Farmer’s Market there. We swung by See’s Candy for some treats and even got some dessert for the beach. Next we headed over to Santa Monica Beach where we laid out a blanket and did what most people do, took a million selfies! We did sit wrapped in a blanket (it was a southern California freezing day of 69 degrees) talking, staring at the ocean and listening to Oceans by Hillsong United. It was truly one of our best sister days and something we will definitely make a usual trip! 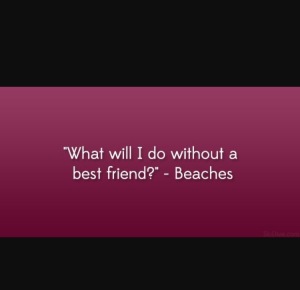 Since we spent the day at the Beach, it was a couple days later before we got to sit and watch the new Beaches movie, and we did it with a box of tissue, some Sees Candy and chips and salsa of course! I’m sure it’s not a spoiler anymore, but in this version, Hillary dies in Cece’s arms! The tissues were on full force now and we definitely were not prepared for that surprise. I won’t go into a full-on review here, but we agreed that although the original version is a well deserved classic, this newer one showcased a more intimate friendship between Cece and Hillary that really leaned more on what my sister and I are all about- love, covenant, committment, loyalty. Obviously, as Christian women, there are a lot of differences in our friendship comparitevly to the film, but Beaches definitely tops our Bestie Movie List!

I (Vanessa) on the other hand had never seen the movie Beaches. I didn’t grow up watching girly/princess movies. However one thing my heart has always wondered was what would it be like to have a sister? To have someone to do all things girls do with? I only have two brothers. The thoughts of having a sister to share clothes with, secrets, laughs, tears, and even fights. I remember when I was pregnant with my third child and found out I was having a girl I thought, well at least my daughters will get to experience what I didn’t. Until one day God brought me a sister/best friend into my life and I no longer have to wonder anymore what it would be like. I have experienced so many first’s as a best friend/sister. One of them was getting to see Beaches for the very first time with her. Beaches is one of her all time favorite movies and now it has become one of mine. I have never seen a friendship between two women lived out like the one in Beaches until now that I have it. I have to  say our friendship supercedes the one portrayed in Beaches. It is definitely a gift from God and one I cherish deeply!