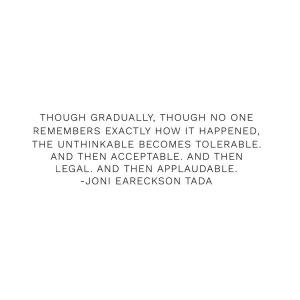 This isn’t an easy topic to talk about, but one we feel needs to be addressed.  For so long, we have allowed sin to creep in little by little. How did we allow this? How did we get here? We believe two reasons –  We lost the fear/reverence of God and the Holy Spirit. Without the two, we lack Godly wisdom and have been unable to speak up with boldness without the power backing us.

Over time, we started to feel the pressures and ideologies of the world make sense. At first, it didn’t seem like that big of a deal. But, over time, little by little, we failed to recognize that the more we accepted societal norms, the further away we were getting from God’s Word until it didn’t even convict us anymore. Some of us look at the things we stand for now and wonder how we got here. Little by little… Some of us have become so conditioned to the things of the world, we don’t even realize we have walked away from God’s principles. Sure, we may still be going to Church and claiming Christianity, but are we really taking a stand for Godly principles?

Romans 12:2– “Stop imitating the ideals and opinions of the culture around you, but be inwardly transformed by the Holy Spirit through a total reformation of how you think. This will empower you to discern God’s will as you live a beautiful life, satisfying and perfect in his eyes.”

1 Timothy 4:1-2– “The Holy Spirit has explicitly revealed. At the end of this age, many will depart from the true faith one after another, devoting themselves to spirits of deception and following demon-inspired revelations and theories. Hypocritical liars will deceive many, and their consciences won’t bother them at all!”

* Deception – we don’t even have the conviction anymore to understand that we’re not right. We believe lies to be true

We are trying to be so politically correct that we’ve sacrificed being spiritually correct. We have a greater fear of man’s disapproval than we do a reverence for God and it is a dangerous place to become hard-hearted to the things of God because when we are, we don’t even feel the nudge of the Holy Spirit guiding truth anymore. The enemy’s plan is to completely distract us from the things of God because then God can’t use us.

We are so afraid of offending people, wanted to be accepted and liked, not wanting to cause confrontation, that we compromise who we are and what our beliefs are to be liked and accepted. That fear of man has so debilitated us that we go along with the sin.

We read this on a blog called Desiring God by John Bloom and we just loved it – “Fear of man can immobilize us when we should take action and gag us into silence when we should speak. It feels powerful, but its power is deceptive.”

Prov. 29:25– “Fearing people is a dangerous trap, but trusting the Lord means safety.”

We have become a nation where sin is literally not just accepted, but applauded. Wrong has become right and right has become wrong. As children of God, we believe it’s time our generation steps up and redefine the Word of God in today’s society.

We have slowly turned away from our faith, allowing things to creep in until we believed them to be true. The media, social media, everything around us has clouded what we knew to be true. We have stepped away from spending more time in our Word and spend more time on social media, watching the News, feeding on everything the world is pouring into us. It is a cunning craft of the enemy to turn our hearts away from the things of God and believe we have to accept the things of the world.

A lot of these issues we are talking about are controversial. Sure, we have ALL sinned and fallen short of the glory of God! But do we keep walking in sin taking advantage of grace?

Romans 6:15– “Well then, since God’s grace has set us free from the law, does that mean we can go on sinning? Of course not!”

Why are girls who were born boys allowed to change in the same locker room as our daughters? Why when I take my kids shopping are there gay pride flags hanging in department stores? Why has this become so common and accepted that we aren’t taking a stand for holiness?

Why are we murdering children in the womb? Do we not remember that, not matter how conception happened that God beautifully and wonderfully created us in our mother’s womb?? Not some of us, depending on how the circumstances were, but ALL of us?

1 Corin. 6:9-11– “Surely you must know that people who practice evil cannot possess God’s kingdom realm. Stop being deceived! People who continue to engage in sexual immorality, idolatry, adultery, sexual perversion, homosexuality, fraud, greed, drunkenness, verbal abuse, or extortion—these will not inherit God’s kingdom realm. It’s true that some of you once lived in those lifestyles, but now you have been purified from sin, made holy, and given a perfect standing before God—all because of the power of the name of the Lord Jesus, the Messiah, and through our union with the Spirit of our God.”

Matthew 10:28– “Don’t be in fear of those who can kill only the body but not your soul. Fear only God, who is able to destroy both soul and body in hell.”

Hebrews 13:6– “I know the Lord is for me and I will never be afraid of what people may do to me.”

It’s time to stop accepting and allowing ungodliness to rein our nation.

Revelation 3:16– “But because you are neither cold nor hot, but lukewarm, I am about to spit you from my mouth.”

We need to CHOOSE whom we will serve, God or the World. We can’t serve both. Either all of the Bible is true, or none of it is true! We can’t take what we want and see what fits our society best! We need to take the Word and change our society!

1 Corinthians 6:12 – 13– “ It’s true that our freedom allows us to do anything, but that doesn’t mean that everything we do is good for us. I’m free to do as I choose, but I choose to never be enslaved to anything. Some have said, “I eat to live and I live to eat!” But God will do away with it all. The body was not created for illicit sex, but to serve and worship our Lord Jesus, who can fill the body with himself.”

“Apparently the Church had been quoting and misapplying the words, “everything is permissible for me.” Some Christians in Corinth were excusing their sins by saying that (1) Christ had taken away all sin, and so they had complete freedom to live as they pleased, or (2) what they were doing was not strictly forbidden by Scripture. Paul answered both of these excuses. (1) While Christ has taken away our sin, this does not give us freedom to go on doing what we know is wrong. The New Testament specifically forbids many sins that were originally prohibited in the Old Testament. (2) Some actions are not sinful themselves, but they are not appropriate because they can control our lives and lead us away from God. (3) Some actions may hurt others. Anything we do that hurts rather than helps others is not right.

Joshua 24:15– “And if it seems evil to you to serve the Lord, choose for yourselves this day whom you will serve, whether the gods which your fathers served that were on the other side of the River, or the gods of the Amorites, in whose land you dwell. But as for me and my house, we will serve the Lord.”

“What are we thinking America? Are the men and women of our nation ready to kill a newborn because we have a new right to murder our unwanted children in their 9th month? Are we truly so demented that we can redefine our bodies which determine if we are men or women? Do we think we are wiser, more just, and greater than our Creator? Has man finally fallen into such darkness of soul that wrong becomes right and right becomes wrong? If we do not speak up and speak out truth – our salt will soon lose its flavor and be thrown out,”